How many Islamic radicals can fit on the head of a pin?

That may as well have been the question posed by Hugh Hewitt to Trump and Fiorina, although not exactly.

“I’m looking for the next commander-in-chief, to know who Hassan Nasrallah is, and Zawahiri, and al-Julani, and al-Baghdadi. Do you know the players without a scorecard, yet, Donald Trump?”

“No.  You know, I’ll tell you honestly, I think by the time we get to office, they’ll all be changed. They’ll be all gone,” he said. “I knew you were going to ask me things like this, and there’s no reason, because, No. 1, I’ll find, I will hopefully find Gen. Douglas MacArthur in the pack.”

Politico and other RINO outlets see this as a Trump misstep.  They look at minutia  while Trump is looking at the bigger, strategic picture.

Others see it more productively HERE.  This is Trivial Pursuit compared to strategic understanding.

The US failed in Vietnam and more recently in Afghanistan because the leaders were entrenched in micro-managing those wars – creating untenable “rules of engagement”, and prohibiting the commanders from being proactive in the week to week changes in enemy leadership and force structure.  Apparently, The Party wants to continue that tradition by expecting candidates to rattle off names and roles of this week’s Islamo Nazi leaders.  These Islamic leaders change month to month and will more than likely be irrelevant by January 2017.

Carly Fiorina apparently saw the question coming and gave a more direct answer.  Knowing this type of detail at this point in time is nice, but how essential is it, really?

We need a Commander in Chief that is a quick learner and sees the big picture, in this case, that Islam breeds radical leaders of terror groups daily –and more important, will act on it.  Trump is likely to act – decisively. 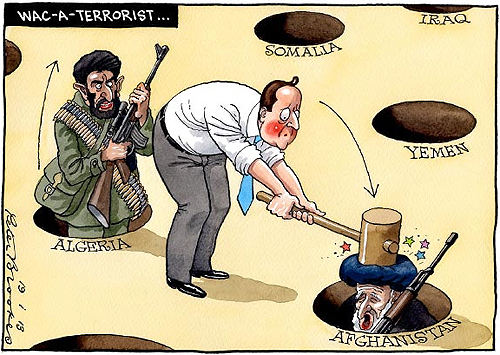 “Whack-a-Mole”:  They pop up, get killed, and pop up again with a different name, but with the same Islamo-fascist mission:  Promote hate of the West and Israel, and do all they can to terrorize and destroy us.

If Trump, or any candidate gets the connection between Islam and so-called “radical” Islamic terror group leaders, I will be happy.  That will be an absolutely refreshing change from what we have in the Whitehouse today.

Posted by Gerardo Moochie at 3:21 PM