Who’s Next after Alex Jones? 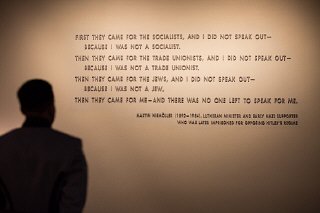 First they came for the Socialists, and I did not speak out—
Because I was not a Socialist.

Then they came for the Jews, and I did not speak out—
Because I was not a Jew.

Then they came for me—and there was no one left to speak for me.

There is a modern day version of this Martin Niemöller quote:

Then they came for the Conservatives and Christians, and I did not speak out – because I was not a Conservative or Christian.

Then they came for me – and there was no one left to speak for me.

Who is “they” in this modern version of Niemoller’s quote?

“They” is the troika of Google, Facebook, and Apple:  The big three of internet domination – among others.  These near-monopolies of internet communications have now gone full bore in defining their own jaded version of “hate speech.”  Their version has become:  Whatever political or social ideology they don’t agree with.  They don’t agree with Alex Jones or his web site “Infowars”, so they ban it.  More HERE.

How far will these monopolies go to censor speech they don’t agree with.  All the way, apparently.

Is it a coincidence that all of these platforms acted in concert, on the same day, to black out Infowars?  Is Infowars correct?  Is there a “conspiracy.”  Sure looks like it.

And Twitter is just as guilty.  An employee, Sarah Jeong, who now works for the New York Times, posted these racist tweets against whites on Twitter: 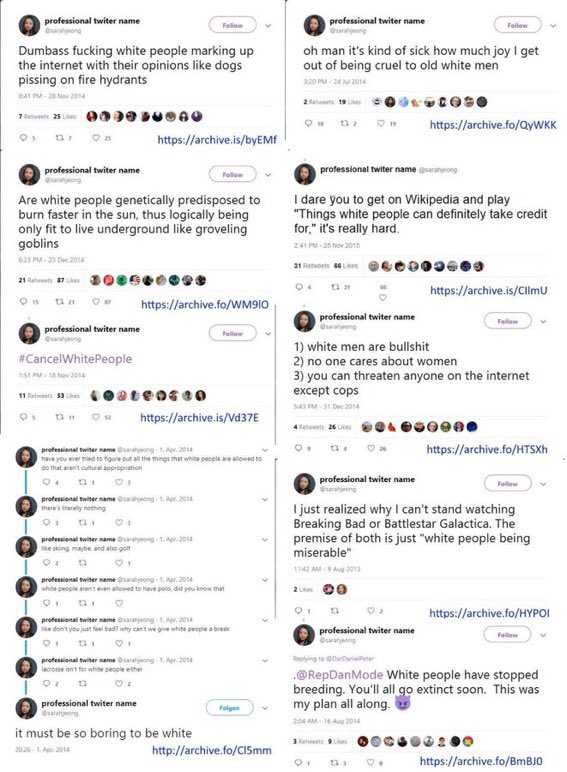 A black Conservative, Candace Owens, published the same racist rants on Twitter, but substituted the words “Blacks” for “Whites” and her account was locked out while Sarah’s remained.   Bias much?

Google the name Sarah Jeong and you will find all kinds of defense for “her right” to be racist.

So, if you are a Conservative, a Christian, a Constitutionalist, a Libertarian, or anyone who disagrees with liberals, progressives, socialists, Communists, or Islam, woe to you if you attempt to express your thoughts on Facebook, Apple, Twitter, of Google social media platforms.

I am familiar with the unbridled, unabashed bias of the media.  I have been banned by the far left distorted news network ABC now for several months.  I view their 6:30 news only to motivate myself by their incessant anti-Trump bias – to learn how the “other side” operates.  And it ain’t pretty.