TO: President & Congress; RE: Illegal immigration

As a citizen of the United States, and as the grandson of LEGAL immigrants, I appeal to you to respect our nation’s borders, heritage, culture, and laws by doing the following with all due haste:

I consider the current, abhorant immigration policies of this nation a personal affront to the integrity, diligence, and patriotism of my ancestors. It makes a mockery of our laws and threatens our nation's survival.

I voted republican in the past two elections. I will not hesitate to vote for whichever individuals will aggressively pursue this agenda and I will join forces and expend resources to encourage others to do the same.
Posted by Gerardo Moochie at 12:20 AM 0 comments

Will images like this make you more or less likely to support the President’s proposed “Guest Worker” (amnesty) program? 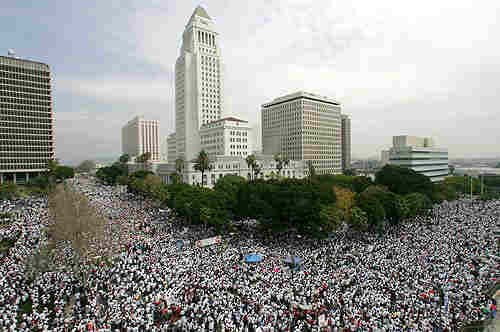 Will images like this make Congress more or less likely to pass the President’s proposed “Guest Worker” (cheap labor at any price) program.

What if you also understood that a great number of these people, if not the majority, are in this country illegally? Further, what if you knew that a great number of them, if not the majority, have their allegience more with our "neighbor" (as corrupt as it may be) to the south more than to the country that allows them the privledge to demonstrate?
See also http://www.michellemalkin.com/ Scroll down to the heading there titled “WELCOME TO RECONQUISTA” The message is clear that many thousands of these people believe the southwestern United States still belongs to Mexico and they intend to make it so.

Call me “old fashion”, but I would consider this to be quite distastefully similar to a group of whatever nationality coming into my living room without invitation, in fact, after breaking in, and making demands of me and my family.

Why should this be tolerated? Why shouldn't every one of these lawbreakers be deported to where they came from?

For the past two years I ranted and warned about the dangers of the growing influence of Islam and its facist tendencies. These demonstrations by these illegals and their sympathizers deserve as much attention because they pose an equal threat to our nation's stability.

What poses an even greater threat to the nation is the very idea that we are no longer a nation of laws and we no longer pride ourselves as a nation worthy of preserving and defending. Even the Catholic Church is in the act - they are a proponent of ignoring our laws. Cardinal Roger Mahoney is directing his Bishops and Priests to shelter all immigrants, both legal and illegal. He is urging that our immigration laws be ignored in the name of Christianity. The last I read the Bible, Jesus would do no such thing. In fact, Christians are urged to abide by the laws of the land. See this site http://jewishworldreview.com/cols/oreilly030606.asp for an excellent discussion of the ideocy of the Catholic leaders in promoting this insurrection.

Lou Dobbs of CNN has an enlightened understanding of the issue in the following article titled "U.S. policy on immigration is a tragic joke" at this site
http://www.azcentral.com/arizonarepublic/viewpoints/articles/0828dobbs0828.html

He concludes by affirming that "Reform begins with the truth. And our elected officials must begin to recognize the reality that a war on terror and war on drugs can be won only by securing our borders and that any reform of our immigration policies must begin first at the front line of the crisis: our border with Mexico."

I'll end this with an admonition spoken by a former president:

"In the first place we should insist that if the immigrant who comes here in good faith becomes an American and assimilates himself to us, he shall be treated on an exact equality with everyone else, for it is an outrage to discriminate against any such man because of creed, or birthplace, or origin. But this is predicated upon the man's becoming in very fact an American, and nothing but an American...

A nation that loses respect for its laws... a nation that loses respect for its culture and has no control over its borders, and allows its' infiltrators to run rampant in protest against their host nation is in fact a nation in deep trouble. We have lost control of ourselves. We are more and more a nation divided. How long will it stand?
Posted by Gerardo Moochie at 10:39 PM 0 comments