Will Obama chasten the Air Marshals?

Another Air Marshal on a United Airlines DC to Denver flight did his job.  99% of us will say “job well done”  and “thank you.”  But probably not Obama.

If it was “mere sarcastic jesting”, I predict Barack“kiss-the-butt-of-Muslims” Hussein Obama will chasten and intimidate the entire Air Marshal staff for “over-reacting.”  It will be another shoot-from–the-hip Cambridge Police-esque loose lip Obama blunder.  He may even order the Attorney General to file charges against the Air Marshal for assault and battery and committing a “hate crime” along with racial profiling.

The fact the dimwit was joking is beside the point.  At best, we have a wise ass Qatari diplomat, Mohammed al Modadi, with full immunity provoking our airline security apparatus by illegally smoking in the john and then jesting to the Air Marshal that he’s trying to light his shoes on fire.  His actions were indications of the worst case:  Attempting to blow up the plane.  In any event, he was an arrogant and stupid bas-ard.  I love name-calling when it really fits.  More on the story HERE.  It doesn’t help his case that he went to Denver to visit a jailed Al Qaeda operative.  Why wouldn’t his visit be called “giving aid and comfort to the enemy” – the crime of treason*? Oh wait, Obama does the same thing.

As it turns out, we apparently allow Islamic diplomats to visit Islamic terror convicts all the time.  No wonder they communicate so well.  They don’t even need cell phones, oh, except to trigger the explosives.

Another probability:  Mohammad was testing airline security under the protection of diplomatic immunity.

Don’t forget what Obama (or Ayers) wrote in his Audacity book:  If things turn ugly, he will stand with the Muslim immigrants.  That’s like saying “to hell with the rest of you Americans.  I will defend Muslims and the Islamic religion if things turn ugly.  I don’t care who creates the ugliness.”

That’s just what we have to expect from this unfortunate-for-the-US Muslim-inspired president.

…the Supreme Court of the United States established that for a prosecutor to take an "aid and comfort" treason indictment to a jury he must prove four elements beyond a reasonable doubt: (1) an overt act, (2) testified to by two witnesses, (3) manifesting an intent to betray the United States (which can be inferred from the overt act itself), (4) the act providing aid and comfort to the enemy. More…

From the Denver Post:  “Maybe he slipped by while the TSA was busy with this important task…” 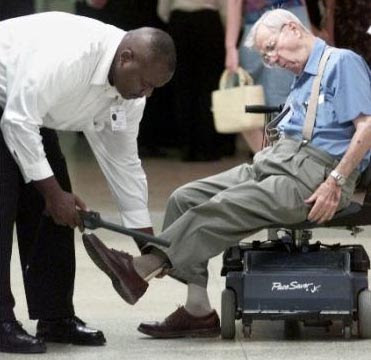