Obama’s (and Bush’s) failed Middle East policies lack one key ingredient:  Islam – the Islamic ideology and the culture of hate, inbreeding,  and psychosis that Islam has cultivated over 1,400 years.  As many military leaders well versed in the art of war have pleaded, we can’t win a war fighting against a “tactic.”  Terrorism is a tactic.  Wars are won against an ideology.  The enemy ideology needs to be known, understood, feared and hated for us to prevail against it.  For a decade after we won WWII, “Nazis” were still portrayed as evil even by the children of the ‘50’s.

To the contrary, today we dare not identify the enemy ideology.  Today our Federal government portrays anyone who dares speak the truth about Islamic doctrine and terror as not just “evil”, but bigoted and intolerant.  We are undergoing a massive barrage of disinformation about Islam from our Federal government.  The reason given?  There are too many Muslims.  We don’t dare offend them.  God forbid if there were 1.4 billion Nazis.  We would have dared not piss any of them off.  Do numbers make the problem go away?  Hardly.

Our multi-front, prolonged wars in the Middle East have failed and continue to fail because we coddle the ideology, Islam, and fail to properly identify it as the evil ideology we are battling.

Today our Attorney General blatantly imposed that same losing strategy at home by purging the transcript of the 9-11 calls from the Orlando Muslim jihadist of any verbiage containing any reference to Islam, Muslims, jihad, caliphate, or any other words providing an accurate Islam/terror connection.

Here’s an excerpt from a Breitbart article called See No Sharia:

“The FBI released today a partial transcript of the Orlando shooter’s mid-massacre calls to 911. It was sanitized to conform to the Obama party line: The attack has no connection to the Islamic State or, for that matter, to Islam.

“As Attorney General Loretta Lynch Lynch put it: “What we’re not going to do is further proclaim this man’s pledges of allegiance to terrorist groups, and further his propaganda.”” 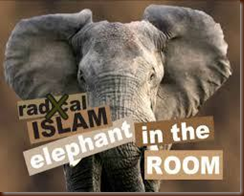 Until our government accepts reality and faces that reality with words and actions that accurately identifies the ideology that wishes our destruction, we will continue to fail – Islamic terror will grow and drain our lifeblood as a nation by a thousand cuts.

It’s nice to hear the words “Boston strong” or “Orlando strong.”  A nice, but hollow platitude based on blindly ignoring the Islamic elephant in the room.

UPDATE:  Obama’s Justice Department relented and released an almost complete, unredacted transcript HERE.  One fatal flaw remains:  The word “God” replaces the Islamic “Allah” as if there is no difference.  In fact, the differences, as understood by each religion, are striking and quite opposite.  The Islamic “Allah” is an impersonal, unknowable, vengeful god that encourages violence and hate.  Merciful?  Only to those who submit in a manner approved by the local Imam.  The Judeo-Christian “God” is opposite in every respect.

Posted by Gerardo Moochie at 5:48 PM