Nationalism or One-world government: The choices before us…

These are the political options as I see it.  For those who dislike “black and white” comparisons, tough tamales (in deference to borderless Mexico).  It is black and white.

The parties and especially the candidates’ polices make this a black and white issue.

The Democrats are clearly for a one-world government.  Obama, the Clintons, Sanders, Pelosi – the whole crew promote free trade, borderless migration, infinite immigration, policing the world, and foreign handouts we cannot afford.  Reducing our nation’s sovereignty is an acceptable casualty of their aspirations.  Secretary of State Kerry wants a “borderless world” as he pleads HERE.

Every one of their policies rack up our national debt, cause us to eliminate jobs while making the United States less autonomous and more subject to the actions of other nations for our prosperity or impoverishment.  They are “progressives”, and the progressive mantra is elimination of national borders and culture while inexorably moving toward one-world governance. The options could also be seen as “greater national sovereignty or less.”

The Republican establishment comprised of the majority in Congress and their supporters and financiers - aka “special interests” - are in philosophical if not procedural lockstep with the Dems with regard to this One World business.  They have the same aspirations, but at a more gradual and less overt pace.  The analogy I will use is “radical Muslims” and “moderate Muslims.”  They both have the same ultimate objective – a one world Islamic Caliphate.  The radicals want it quicker.  The moderates will take their time.

Donald Trump, and to a significantly lesser extent, Teddy Cruz, are the exceptions.  Trumps’ mantra has recently crystalized into “nationalism” – America first.  This wasn’t real clear at the beginning of the campaigns, was it.  Now it is.  He wants every action taken by our government to benefit our 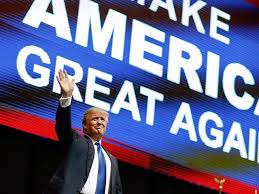 nation – not the world at large.  Cruz occasionally sounds like he has a similar message, but his recent allies – Rubio, Kasich, Bush, Graham, Fiorina, and “one-world” leaning conservative media – along with his Goldman Sachs wife, Heidi, compromise his sincerity.

Package all these policy proposals together and we have what progressives call “bigoted”, “racist”, and “xenophobic.”      Or in other words, what we have in the past cherished as “nationalistic”, “patriotic”, “loyal”, and “special.”  What just a few decades ago were thought of as great qualities of proud American citizens have been turned on their ear by progressives and become hateful qualities.  Trump is the one candidate who has hit a chord with what I sincerely hope is a majority of us who would like to return to these positive American, and yes, nationalistic qualities.

Europe is further along this progressivist, one-world road than is the United States.  A Trump presidency may provide a short-lived reprieve from our trek toward Bush’s New World Order.  But it might also provide a spark that ignites enough pride in our nation to foster a multi-generation march to rebuilding our damaged national pride and prosperity.

To see an example of the extent of sentiment against nationalism, I invite you to Google “Google Images” and enter the word “nationalism.”  You will see in a significant portion of the images how our media and much of the world view nationalism.  Progressives don’t mind sacrificing a very good thing, the former greatness of our nation to join the relative mediocrity of the rest of the world.

Posted by Gerardo Moochie at 12:03 AM

You are absolutely right on...arguably right on and it is scary for those of us who believe in U.S. pride, principles and achievement. I fervently wish Europe and Asia were not beyond return. I am afraid, however that Europe is lost.

If Trump becomes president, it will be a bitter-sweet victory for us seasoned traditionalists who have been part of U.S. success and experienced its generations of human fulfillment. Those hell-bent on one-world politics will make life as difficult as possible for us...and for Trump is he "succeeds."

Future generations; wayward civilizations; may never experience what we have enjoyed. That includes our grandchildren...and it is sad.