Give up liberty or give up safety–a chicken and egg dichotomy, oh my…

You’ve heard it said in defense of extreme libertarian intransigence:   “Those who give up liberty for security deserve neither.”  I’m certain this attempt to quote Ben Franklin was made hundreds of times to discredit the FBI’s attempt to hack into the Islamic terrorist’s Apple phone.

Here is what Franklin REALLY said:

Those who would give up essential Liberty, to purchase a little temporary Safety, deserve neither Liberty nor Safety.

While the context of Franklin’s quote was more about taxes for defense of western lands then either liberty or security – as explained HERE - it is not a stretch to interpret the quote in the context of “liberty versus safety.”

There are several other things wrong with this misrepresentation of Franklin’s quote besides misrepresenting it.

First, giving up one or the other is NOT an “all or nothing” event.  There are a thousand shades of both liberty and safety.  Hacking Apple’s phone to achieve an additional increment of “safety” will not obliterate “liberty.”  “Liberty is not destroyed by the NSA doing bulk scans of phone conversations.

I am more prone to reverse the misquote of Franklin’s saying to this:

“Those who refuse to give up a little liberty to achieve safety may end up with neither.”

How can I suggest such a politically incorrect, dangerous and immoral thing?

Some families choose to install a home burglar alarm system. 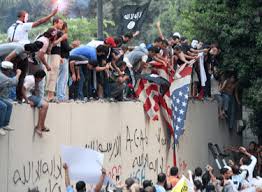 The same trade offs apply to this purchase.   A little liberty for a little more safety.

If we had neither guns for defense, alarms for intruders, fences for trespassers, walls for privacy, nor armies for defense, we would have no safety.  Having security insures our liberty.

If we fail to give up a little liberty to achieve safety, we will, in fact, eventually end up with neither.  I always thought there was something a little “one off” with that misquoted expression used against enhancing our national security.  Now that I have thought it through, I am certain.

Here are my preferred expressions:

Posted by Gerardo Moochie at 3:13 PM