A full page report in the Florida Catholic of the Orlando Diocese, March 25-April 7, 2016, issue, page A9 lays out their absolute disregard of our nations’ laws in favor of no-borders immigration.

In fact, “Global Sisters” goes so as far as lying about the words of the 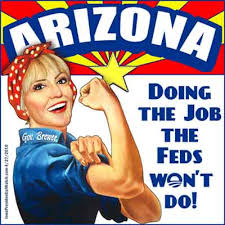 candidates.  One example is this:  “…Trump…has basically called Mexican immigrants criminals.   No!  Trump did not basically say that.  He called those who enter the United States illegally, breaking our national immigration laws, criminals.  They are criminals.  They broke our immigration laws.  Makes sense to me, but not to bleeding heart Catholics who prefer to distort the facts to fit their open borders agenda than report facts accurately.

The balance of the article could just as well have been written by Che Guevara, Chairman Mao or Barack Obama.

One bright spot.  The writers claim that “there appears to be a disconnect among many Catholics between Catholic social justice teaching on immigration and their views.”  True, the majority rank and file Catholics are not for open borders.  They prefer the rule of law which the hierarchy of the Church apparently disdain.  Thank God for Catholic laity!  Most don’t have the same tax-sucking, self-serving illegal immigration agenda as do Church hierarchy.

1)  The right to migrate while giving lip service to the right of countries to make their own laws, apparently only if they agree not to enforce them.

are confused between “legal and illegal”, and between “law abiding and law breaking.”

Here is a picture of Catholics avoiding application of “The Golden Rule.”

Finally, the article cites the Golden Rule.  The way they wish us to apply it is “if we are ok with ignoring our laws, we should not criticize others for breaking laws.”  Yes, do unto others as we would want others to do unto us if we wanted to ignore our laws.  They want our legal system to be deaf, dumb, blind, and non-existent.

The Global Sisters attitude toward our nation, illegal immigration, and disregard for our legal system verges on sedition.  Shame shame.

Posted by Gerardo Moochie at 7:04 PM

So I see that Muslims aren't the only ones who run amok of our society.