Radical leftists are back…back from the sixties.

Bill Ayers and his gang of violent Communist rabble rousers are back, back in Chicago – not that they ever left – and Dayton, and probably a hundred other places in the near future where their big government, free-stuff socialist machine appears to be threatened.   Black Lives Matter (a racist incarnation of Occupy Wall street hippies), Muslims, and other government freeloaders have joined in the melee.  Each group is doing all they can to defend their anti-American ideology.

And which candidates are promoting and defending these violent and disrespectful demonstrations?  Yup, Bernie (the Communist) and Hillary (the lying security risk).

Here are the two opposing views of these campaign disruptions:

1) These demonstrators are hell-bent on taking away the freedom of speech of any candidate they happen to disagree with.  The same would happen to any Republican front-runner seen by the left as a threat.  Fact is, only Trump is seen as a threat to the free hand-out crowd.

Freedom of speech is favored by the demonstrators only when they agree with it.   They will dictate what can and cannot be spoken by their disruptive behavior.

2) The other view was recently presented by Marco Rubio who of all people should know better.  His view, ironically shared by the Socialists, Communists, Muslims, and Hippies, is that it is all Trump’s fault.  Trump is the “inciter” and should keep his politically incorrect mouth shut.  If the truth is felt to be offensive or hits too close to home, it should be stifled.  Rubio’s accusations sure tell us where he stands with his weak view of freedom of speech and expression.

Of these two views, the one you feel most comfortable with will tell you which group you most identify with:  Those who support free speech, mutual respect, law and order, or those who engage in disrespectful anarchist disruptions and prohibition of free speech.

We’ve lived with squelched truth for way too long – ever since the university systems and the public schools began their intolerant socialist indoctrination of their students 40 or 50 years ago.  There is only one way to think on school campuses.  Ask any conservative group who has tried to get conservative speakers on campus what they have to go through.

Give an opposing view about global warming:  Shut up!

Give a less than flattering yet truthful facts about Islam and Muslims:  Shut up!

Suggest we enforce immigration laws and our borders:  Shut up! 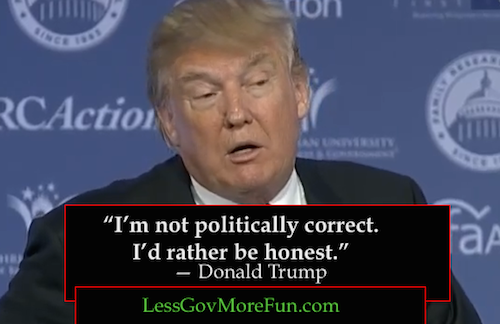 Urge people to get a job, be self-sufficient, responsible citizens:  Shut up!

Promote measures that enhance manufacturing jobs in America:  Shut up!

Trump is the personification of what most of us have been thinking for several decades.  He has channeled and is effectively projecting America’s frustration and disgust at being told what not to say and what not to think.

Posted by Gerardo Moochie at 7:48 PM

A-men. We know it; we see it; we recognized it in the sixties and back then we were called "the silent majority." As long as we were silent it was OK. But we're not silent any more. We have a voice...and we'd sure like to have a President.