I love the idea of “Make America Great Again”.  It’s a wonderful campaign slogan and a sorely needed sentiment.  I have read an occasional distractor who said “America isn’t great already?” in his attempt to lay a revealing Michelle Obama sentiment on him – remember her quip “For the first time in my adult life, I’m proud of my country?” She never was proud of her country – she has a third world value system.

Trump is proud of his country and always has been.  But he remembers there was a time when it was GREAT.  You have to have your head buried or have a 3rd world sense of values to believe it is as great as it was a decade or two ago.

Which brings me to the cap.

Ok, so I know all proceeds are going to Donald’s campaign, but $32.10 for a cap that would bring in lots of money if it was $25.00 including postage.  Or even $15 with postage.  And his registered logo is on it that everyone knows represents Donald Trump.

So, being the cheap SOB that I am, I checked around the internet for options.  I found this: 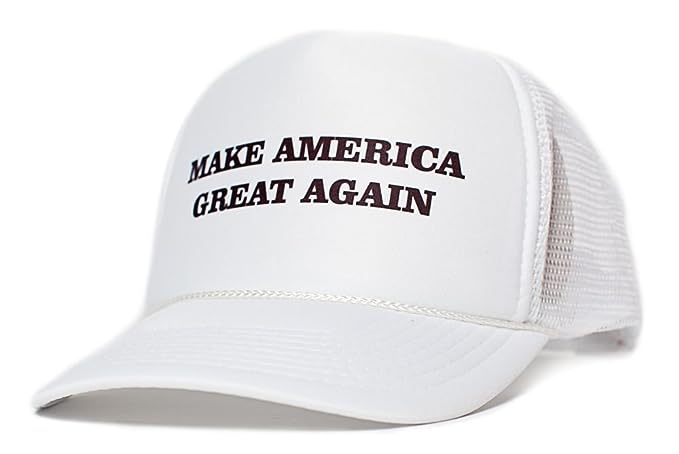 This one is $8.99 including free postage.  Order it HERE.  Granted, the $25 hat appears to have embroidered lettering.  It may be higher quality.  But hey, who cares, unless your primary purpose is to contribute $32.10 to someone who already has 1,000,000 times more money than you do, with the hat being the Cracker Jacks prize.

And HERE is a third way to get the hat, apparently using the cheaper version of the hat above as an incentive to try a trial version of Newsmax magazine.

OK, I really like The Donald.  I appreciate his frankness, his anything but political-correctness.  His nailing many of the major issues that are killing our country.  But I am not yet fully on board yet.  Don’t get me wrong.  I will vote for Trump against any Democrat that is put up.  And I would vote for Trump on the third ticket if one of several RINOs were nominated.

Here is my reservation.

Our ne’er-do-well national leaders fail to identify the ideology that informs and motivates those who wish to destroy us.   We are spending billions of dollars per year and wasting thousands of lives without identifying the ideology that we are fighting against.

I dread this country making the same mistake in the next election.

I will quote a brief description of each Republican presidential candidates position on Islam relative the the threats we face as provided by Pamela Geller.  Whether you like Geller or not, her synopsis provides a fair indicator of their positions.

Jeb Bush, Former governor of Florida
Son of former president George H.W. Bush
“[Islam has] been hijacked by people who have an ideology that wants to destroy Western civilization, and they’re barbarians.” Bush is a weak sister, not capable of handling what’s coming.

Ted Cruz, Senator from Texas
A nuclear-armed Iran is “the single greatest National security threat” today. For my money the best candidate on this issue. Cruz said the U.S. cannot defeat jihad  if it doesn’t identify it. “It is a bizarre, Orwellian double-speak that this is a president who will not utter the words ‘radical Islamic terrorism,” Cruz said.

The Republican senator noted that Obama called the terror attack in Paris “a random act of violence.” “When radical Islamists go in with butcher knives to a kosher deli to murder Jews because of their Jewish faith, it’s not random,” Cruz said. “It is naked anti-Semitism.” Cruz said that Iran is America’s no. 1 security threat, while radical Islam ranks second and Russia places third.

Carly Fiorina, Former CEO of Hewlett Packard
“I believe that terrorists who kill in the name of Islam are subverting that religion.” She’s done.

Mike Huckabee, Former governor of Arkansas
“The Bush administration has never adequately explained the theology and ideology behind Islamic terrorism or convinced us of its ruthless fanaticism. The first rule of war is ‘know your enemy,’ and most Americans do not know theirs.” Huckabee is a strong contender on this.

Bobby Jindal, Louisiana Governor, Former Louisiana Congressman
Views the conflict as ideological and defines the enemy as ‘all forms of radical Islam’ and sharia law. Jindal is one of the best on this issue.

George Pataki, Former governor of New York
Opposes the nuclear deal with Iran, saying the regime is ‘as trustworthy as a snake in a basket.’

Rand Paul, Senator from Kentucky
“We must understand that a hatred of our values exists, and acknowledge that interventions in foreign countries may well exacerbate this hatred.” His isolationism anti-Israel positions make his a most undesirable choice.

Rick Perry, Former governor of Texas
“To every extremist, it has to be made clear: we will not allow you to exploit our tolerance, so that you can import your intolerance.” Any yet he instituted an embarrassing pro-Islamic curriculum in Texas public schools.

Rick Santorum, Former Senator from Pennsylvania
“Terrorism is a tactic that is not an ideology. [You have to] identify the ideology … and realize that’s their motivation.”

Donald Trump, Billionaire real estate mogul and president of the Trump Organization
“I say that you can defeat ISIS by taking their wealth. Take back the oil. Once you go over and take back that oil, they have nothing. ” Which is nonsense. In the wake of the jihadis’ assassination attempts on my colleagues and me, Trump attacked me repeatedly over the Garland free speech event. Trump is pre-eminently unqualified to fight the gravest threat to our national security. If you don’t understand the elemental principle of free speech, you cannot properly defend this nation.

Scott Walker, Governor of Wisconsin
“U.S. strategy against Islamism must target the radical Islamic ideology and not just the Islamic State and Al-Qaeda terrorist groups ”

The views represented above may not be the last word or accurately reflect the true position of each candidate.  We have much more to learn.  But this is a fair start to discerning who gets it and who doesn’t about Islam, the religion that is the catalyst of world terror and the primary reason we feel we must spend billions on national security.  Not “radical” Islam, not those who merely commit “work place violence” or “random acts of terror.”  No.  It is the toxic doctrines, leaders, and texts of orthodox Islam, strait from the pits that birthed Muhammad himself – the most perfect human being based on the teaching of the Islamic religion.

Trump oddly decided to be politically correct (very out of character) in his denunciation of the Draw Muhammad Art Contest.  How ignorant of Islam is he?  Or does he have interests in the lands of Muhammad that will distort his actions as a national leader?

Huckabee, Jindal, Santorum, Walker, and Cruz appear to be the best informed and most outspoken about identifying “radical” Islam as the threat.  Although I do wish they would all lose the modifier “radical” when they speak it.  It is Islam, period.

To “Make America Great Again”, we need to clearly and boldly identify our enemies.

Posted by Gerardo Moochie at 3:21 PM