I’ve heard some folks complain about their inability to get health insurance when they retire before the age of 65, the age when they would become eligible for Medicare. In fact, they will use this alleged “deficiency in the system” as a reason to support excessive federal involvement in or “socialization” of the health insurance system.

There are many perceived inequities in our current healthcare system.  But the health insurance gap for those who choose to retire before age 65 is not one of them.  The age one retires is most often a choice.  If a person retires at age 63 1/2, he has 18 months of COBRA to carry him through to age 65.  But if he chooses to retire at 62 or 55 why should he be “entitled” to insurance subsidized by taxpayers?  Early retirement was his decision.  He wasn’t forced to retire early. Just because we have the option to begin collecting reduced social security payments at age 62 does not mean we should also be entitled to subsidized health insurance at age 62.  The system wasn’t set up to do that, and there is no inequity in the way the system was set up.

In fact, if the system is changed at all, it ought to be changed to reflect the increasing longevity of retirees by increasing the age of Medicare eligibility.   The chart below shows male retirement age in 1950 to be almost 67, while life expectancy was less than 65, leaving zero years in retirement. 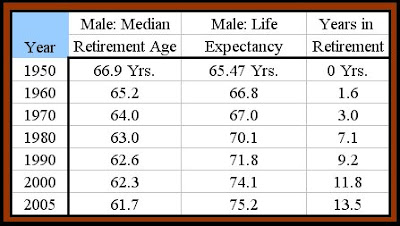 Based on CDC data

In 2005, the average retirement age was a few months less than 61, and the life expectancy was 75, providing 13.5 years in retirement.  These facts make the Medicare program something it was never intended to be: A medical plan for those who don’t need to retire and are healthy enough to continue working.

If there is any question why Medicare is underfunded, it is because of the entitlement mentality of existing and future recipients.

Will workers feel entitled to receive discounted insurance at age 50 or age 30?  Yes.  It is happening now.

The prevailing motive of many who are in favor of government option health insurance is their desire for something for nothing paid for by others from an increasingly socialized federal government – a desire to be “entitled” at someone else’s expense.

Refusing coverage for preexisting conditions is another matter. The two areas where there are inequities – refusing insurance to those with preexisting conditions and prohibiting insurance company competition across state lines which arbitrarily reduces competition – should be corrected.  That can be accomplished through legislation without excessive government intervention or unfair government competition subsidized by taxpayers.

Posted by Gerardo Moochie at 11:04 PM