We know why Obama does what he does; but why does the electorate do what it does?

The vinyl fence in my back yard has a lot of mildew on it because most of it is in the shade of a good-sized Oak tree.  I finally found a product that easily eliminates that mildew.  Its label says it “attacks mildew at its roots.”

Apparently cleaners that DON’T attack the root don’t work as well or at all.

The same can be said about Obama’s failing Middle East and national security policies.  He views the problem as “work place violence” or “lone wolf attacks.”  He will use every trite label and excuse to avoid identifying the root cause.  Those sloppy characterizations of universal Islamic terror provide the basis for other erroneous conclusions.  For example, his State Department suggests lack of job opportunities as a root cause of ISIS recruitment success.  That might be true if the hate, attacks and terror were coming from a wide array of ideologies held by people equally pissed off at the lack of job opportunities.  But the hate, attacks and terror come from one single ideology:  Islam.  Our university-brainwashed State Department atheists cannot grasp the concept that there exists societies and belief systems that value other things higher than a good job and a middle income, consumption-driven lifestyle.  Middle East Muslims don’t fancy after the same things we do.  They might even be several generations away from appreciating the golden rule versus their favored “do unto others before they do unto you” mentality.

Retired Air Force Gen. Michael Hayden believes Obama is trapped by his own words on Islamic terror.  But the General falls short of the one essential ingredient that motivates Islamic terror:  Islamic doctrine.  It is not simply “radical Muslims” inventing their own doctrine apart from Islam.  It is orthodox, fundamental Islamic doctrine that they follow.  That is the root of the problem.

Islam is the common denominator; the root of the problem.  Yet Obama remains in denial.  The Atlantic monthly takes several pages to attempt to explain the reasons for Obama’s denial HERE.  I will explain in one sentence.

Obama was raised Muslim, went to Muslim schools, his father and many close relatives were Muslim, he attended a church for 20 years that favored Islam over Christianity and consequently his entire world view is formed by and based on his Muslim experience.

Deception and defense of the faith are key aspects of Islam.  That is why Obama’s incessant and illogical denial that Islam has anything to do with rampant Islamic terror in the world is his mantra. 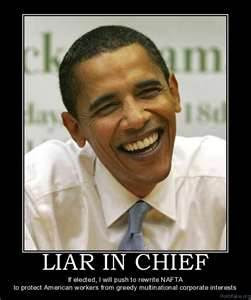 Many of us knew these traits of Obama a few years ago.  The more difficult question for me, today, after two elections and dozens of gaffs and missteps, is why do 50% of the electorate still  approve the job Obama is doing? (Both Gallup and Rasmussen as of February 17, 2015)

Here is what I believe is the root of this problem:  Corrupted human nature.

Here is an example:

Assume two equally competent politicians (I know, I know – that’s a stretch, but bear with me for this example).  One is particularly skilled in schmoozing – he is full of charisma, but has a tendency to shade the facts to tell people what they would like to hear.  The other is particularly skilled at getting, understanding and explaining the facts and likely solutions, but is weak in the charisma department – but insists on telling of things the way they are.  Who will be the more successful politician?  “Cool” wins over “competence.”

That is what we have today and have had since humans roamed the earth.   The Obama/Romney race gave us a front row seat to that dichotomy.

This raises another, more fundamental question in my mind:  How did the human race survive as long as it has given our tendencies toward avoiding facts and truth and preferring lies and excuses?  The only thing that comes to mind is that the balancing forces of hormones, sex, and reproduction maintain our existence despite our predisposition to be liars and deceivers.

That is a major reason why the Muslim birth rate has to be as high as it is.

There you have it – the root of the problem.

Posted by Gerardo Moochie at 4:57 PM