Promoting jobs for jihadists is like suggesting abstinence for addicts

Or even more to the point, the idea of economic  prosperity is exactly what the resurgent Islamic ideology is against.

Obama and his junior varsity State Department don’t get it.  They are stuck in a Westernized mindset.  They believe that health and wealth is a universal ideal.  They fail to appreciate the fact that in some ideologies at some points in time there arise other priorities.  At this time in Islamic history, as in most periods of its history since its founding, Muslims number one priority is to destroy the wealth of others.  And that priority does not include their desire to be smitten by job opportunities.

One of their principle recruiting mantras is the un-allahness of western wealth.  They have joined hands with leftists and Communists like Obama and the 99%-ers who find it more satisfying to destroy prosperity than participate in it.

The companion motivation is to portray themselves as defenders of the moral high ground.  They see the West and Christiandom as immoral and corrupt.  They point to our obsession with entertainment, our promotion of homosexuality, our pornographic media and related favorite pastimes of our culture as things greatly displeasing to allah.  That justifies to them their moral superiority and motivates them toward their holy war against us.

They don’t have time for jobs.  The mere suggestion of “better jobs” to most of the jihadi types is like throwing gasoline on a fire.  It is an attack on their Islamic sensibilities.  Jobs and economic prosperity are the very things they are crusading against.

The evidence for this diagnosis lies not only in their doctrine and history of conquests through North Africa and Europe, but in their current reign of terror.  Their destruction of the World Trade Center was symbolic of their motivation:  destroy symbols of prosperity and economic wealth. 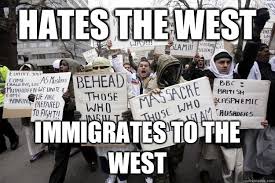 The latest demonstration against symbols of Western prosperity is al-Shabaab’s plan to attack the Mall of America located in Bloomington, MN, an urban suburb 8 miles south of Muslim-infested Minneapolis. These fine, job-seeking souls have published their intent in a video as described on FOX HERE.  And more from Pam Geller HERE and Front Page Magazine HERE.

This threat highlights the fact that our intelligence agencies have little clue as to who comes to our nation:

Jim Kallstrom, the former assistant director of the FBI’s New York office, said the FBI has a “huge job in front of them.

“You look at the Mall of America, you look at all the malls then you start to backtrack and say you know it would be nice if we knew what comes and goes into the country,” Kallstrom told Fox News on Sunday. “We don’t have a clue.”

These are not “job seekers” in Syria or Libya or Somalia.  These Muslims are located in one of the more prosperous urban areas in the United States.   And this location also happens to be one of the most heavily Muslimized regions in the US.  Given that the US Census is prohibited from counting people based on their religion (a deadly blind spot in our planning for attacks) estimates of Muslim populations in any US location is difficult as described by the Federal Reserve Bank of Minneapolis HERE.

The Mall of America employs 11,00 year round.     They have dozens of  job openings provided on THIS web site.  This does not include openings in individual stores.

But no. These jobs are not what Somalian Muslims of Minneapolis really want.  They want to destroy the jobs, the symbols of western decadence.  They have an agenda that does not match the agenda of the West.  They already have great, motivating jobs, thank you.  They have jobs that plot and deceive and destroy.

We are so damned prideful that we believe every other God forsaken culture in the world wants what we want.  False!  That strategy is causing us to waste billions of dollars and thousands of lives because it does not address the motivation of our enemies.  It only incites them to more acts of terror and carnage.

How about we worry about getting jobs for Americans who want them, and deport the Somalians who don’t.

Speaking of jobs for jihadists, below are State Department job applications that are just now starting to pour in – thanks to Tyler Durden at http://www.zerohedge.com/news/2015-02-22/satirical-sunday-jobs-jihadists-applications-flood-state-department :

(If only they were this obvious.  But then again, the obvious doesn’t matter.)

Posted by Gerardo Moochie at 12:38 PM