Oh oh, we don’t want a candidate who fights for our country too aggressively…

God forbid we get a candidate who is too aggressive, too self-confident, too over-powering to fight for the good of our nation.

For the past two presidential election cycles I’ve heard Republicans and especially conservatives lament the fact that Republican candidates are not forceful enough, lack conviction, don’t have enough “fire in the belly.” 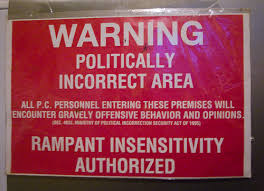 Donald Trump fits those specifications to a “T.”

Yet Republicans and many conservatives are still not satisfied.  No wonder we lose.

They feel that Donald Trump is too much of a good thing.

They complain about his “tell it like it is” style.  He is too frank, blunt, and up front.  I guess they want a candidate a bit more like Little John or Mild Mitt so they can lose again.

They note that polls show that even Hillary is sometimes less disliked than Donald.  Yet Republicans and conservatives complain about politicians who pander to the welfare and government dole class to gain “likes.”  Yup, promising more “stuff” does help make the greedy, selfish, and ignorant among us like politicians more.  That explains why Hillary is disliked less.

Yes, Trump is a showman, just like Reagan was an actor.  As a showman, Trump uses hyperbole to make his point about really liking “quality” and optimum performance in running the country.  He had an opportunity to use hyperbole when he joked about the poor sound system in Pensacola during a recent event.  The audio really was poor, so he went into a schtick about “firing” the sound guy.  Here are quotes from The Business Insider:

Pensacola’s Microphone System – or so it seemed

Trump added: "This mic is terrible. Stupid mic keeps popping. Do you hear that George? Don't pay him! Don't pay him. You know, I believe in paying, but when somebody does a bad job like this stupid mic, you shouldn't pay the bastard. Terrible. Terrible. It's true."

The billionaire businessman said he hoped the sound system was functioning for the packed crowd, but he kept hearing a "boom" sound.

"So we're not going to pay," he continued. "I guarantee you I'm not paying for this mic. Every two minutes I hear like, 'Boom! Boom!'"

Reporters covering the rally said they had difficulty understanding the candidate as well.

That rant shows me that Trump does not tolerate mediocrity.  He doesn’t put up with it.  And he will make that abundantly clear.  Sure, he could have had his people talk with the sound people after the event.  But that would not have revealed to the audience his quest for quality in everything he touches.  That is a major part of the package he is offering to bring to Washington:  Quality in government – zero tolerance for bad performance.

The naysayers also criticize those who compare Trump to President Reagan.  There are two different characteristics of each person that are being compared.  The accurate characteristic is that both were outsiders, bucking the establishment.  Reagan formerly associated with Democrats as did Trump.  And to a lesser extent, both were not primarily politicians, except for Reagan’s stint as Governor of California.

The comparison that the naysayers object to is the comparison of style.  Reagan was relatively soft-spoken, more like Romney, but with a better sense of humor.  Reagan sounded fatherly.  Trump sounds brotherly – or more like a coach.  Trump is anything but soft-spoken.

Reagan fit the nation’s needs of 35 years ago.  Trump fits the nation’s needs today.  There is a greater need today for Trump’s style than Reagan’s.  Why?  Many things have changed.  We’ve have a number of new and more serious threats to our nation today.  We didn’t have the problem of rampant illegal immigration that was allowed to fester and degrade our economy over the last two decades.  We didn’t have the problem of Islam that is a real threat to our freedoms and national security.  We didn’t have the out of control federal spending and huge and growing national debt to the extent we have today.

Trump is accused of speaking in sound bites with little substance.  That is the observation expressed by those who would manage a losing campaign in today’s soundbite world.  Yes, he often speaks with the flamboyant, blunt hyperbole of a showman.  If he spoke in significant detail, he would have lost his audience five minutes after he started.  He recognizes the attention span and needs of his audience.  Some would say that doesn’t speak well of the electorate, but that is the world we live in.  Yet at the same time, for anyone who has bothered to read the issue statements on his website, or who has taken the time to read his book, “Crippled America:  How To Make America Great Again” will see his understanding of the issues and his solutions are substantive.  And Trump is well known for finding and hiring extremely well-qualified and well-performing executives.

Yup, we’ve gotten in Trump a candidtate who most of us had wished for over the past eight years.   Yet we still get complaints over too much of a good thing.

I keep reminding myself that no candidate is perfect.  There will be “hit pieces” and bashing commentaries motivated by a variety of reasons.  Most often the motivation will be due to support of another candidate.

Some candidates come closer than others to the ideal that fits today’s needs.

Posted by Gerardo Moochie at 6:01 PM

Excellent article, and right on point! The entire nation needs to read this.

Trump is the MAN!
Vote for him!