(Thanks to World Net Daily)

A traitor in the White House? If the shoe fits ...

“The traitor rots the soul of a nation, he works secretly and unknown in the night to undermine the pillars of the city, he infects the body politic so that it can no longer resist. A murderer is less to fear. The traitor is the plague.”

What is treason? Good old Webster’s Dictionary describes it simply as “betrayal of one’s country to an enemy.” And traitor as “one who betrays one’s country, cause, friends, etc.”

I’ve recently read a biography of Benedict Arnold, American history’s most notorious traitor. Though he was beneficiary of our young country’s opportunities and honors, rising through the military to the rank of major general, historians record he was arrogant and impatient with civilian deliberateness and legislative oversight. He courted the favor of British loyalists, angering the patriots – and exhibited such a love and need for money that he lined his pockets with questionable side ventures.

He decided he wasn’t sufficiently appreciated by his fellows and formulated a treasonous plan to crush the Revolution and revenge himself on Congress. When, amazingly, he was given the command of West Point, he plotted with British Gen. Clinton to surrender the fort for 20,000 pounds! The plot was discovered, and Arnold barely managed to escape to England, where he lived out his life as a social outcast … and infamous traitor.

Is it remotely possible such a terrible thing could happen in America today? What would one of our leaders have to do to be accused of treason?

Suppose America elects a charismatic young president who makes all kinds of brave promises and sweeps into the White House. This young man not only has little political or governmental experience, but none at all in business or administration. Curiously, his upbringing is never closely examined or evaluated; it’s just assumed that anybody elected president must love America – but this young man had been trained by parents and others to consider this country a colonial oppressor and unfit to be a world leader! In college, by his own autobiographical account, he sought out Marxist professors, in not one but three colleges.

Once elected, he uses his newfound executive authority to seal off all his early school, passport and travel records, lest his true intents be uncovered. He eventually has a fake “copy of a birth certificate” created and exhibited on the White House website, complete with glaring errors that betray its falsehood. Somehow Congress seems mesmerized and intimidated from confronting him, so he creates a phalanx of legislative “czars” to regulate and virtually stifle all business and energy progress, and these “czars” – among them known Muslim and Marxist and homosexual activists – report not to Congress but directly to him!

Having declared that he considered the U.S. Constitution a “flawed” document, he proceeds as president to ride roughshod over the document and its establishment of three separate and equal branches of our government, declaring openly if Congress won’t give him what he wants, he “has a phone and a pen” and will make executive decisions and even change laws he has crammed through the legislature, determined to effectively dismantle the two-party system and the separation-of-powers concept.

Now, theoretically, many might call all this treason. But wait.

Suppose that this increasingly arrogant young man, having become commander in chief of the military, begins to quietly fire and replace full admirals and generals who object to his decisions to withdraw from territories gained by the lives of 4,000 brave young Americans, and to issue more orders that will weaken the whole defense system and cost more young American lives. Treason? Wait …

Suppose this pompous man also appoints an attorney general who announces with him that they not only will enable hundreds of thousands of illegal aliens to invade the country – but that they will not enforce the immigration laws themselves! This, knowing that among those undocumented aliens there would certainly be trained enemies of the United States, whose sole purpose for crossing our borders is to destroy the country he had learned to despise as a young man. And what if this attorney general concocts a scheme to furnish thousands of weapons to Mexican drug cartels and potential terrorists? Treason? The case is building.

Now suppose that this Manchurian (or Indonesian) Candidate, never having any business or economic experience, but knowing that one vital reason for America’s world dominance is its giant economy, forces through a weak and compliant Congress decisions that add trillions of dollars of unpayable, inexcusable debt, piling up three times more debt on American taxpayers and businesses than all past presidents combined! In this unthinkable scenario, he is systematically crippling, bankrupting and discrediting his country. And in all of the this, he’s following the plan he had learned from a famous Communist Party organizer.

Now, in this imagined story, we can add the deliberate dividing of the citizens along racial, economic and political lines. We can add his awarding billions of dollars of speculative contracts to party donors and even family friends. We can toss in his leaving his command post while a U.S. ambassador and other Americans are under fire and eventually dying … to pack his bags and fly to Las Vegas for a political fundraiser. A definite Benedict Arnold comparison. 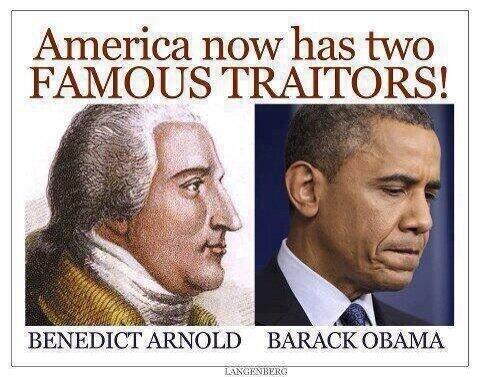 And, to leave no doubt whatsoever, while our nation is slipping into all-out war against inhuman killers who behead innocent people, this pretender in chief makes the personal decision to release known murderers from a military prison and to send them back to the Mideast, all expenses paid and with no penalty for their crimes, to supposedly “rehab” – and then certainly reassume leadership positions with our murderous enemies. No consultation with, or consent from, Congress. Just his own decision, knowing brave young Americans will face these beasts again in a battle to the death. If there’s a clearer definition of treason, I can’t think of it.

All this is theoretical, of course – but I think if such an interloper and subversive impostor were to somehow arise and become our president, if he weren’t eventually exposed, prosecuted and impeached, America should apologize to Benedict Arnold.

And his picture should be posted in Webster’s alongside the words “treason” and “traitor.”

Who is that masked man?

Pat Boone, descendant of the legendary pioneer Daniel Boone, has been a top-selling recording artist, the star of his own hit TV series, a movie star, a Broadway headliner, and a best-selling author in a career that has spanned half a century. During the classic rock & roll era of the 1950s, he sold more records than any artist except Elvis Presley.

Posted by Gerardo Moochie at 10:07 AM