Ebola, if not good for anything else, is good for demonstrating how our brains and common sense are turned off when faced with a new and stressful situation.

This self-neutering mental capacity is caused by two things:

This mindlessness has been the reason for a number of failures in the diagnosis and precautions involving Ebola in the US:

Here is a relevant comment by someone worth listening to:

Marine Corps Gen. John Kelly, commander of the U.S. Southern Command, predicted last week that the Ebola virus will not be contained in West Africa, and if infected people flee those countries and spread the disease to Central and South America, it could cause “mass migration into the United States” of those seeking treatment.

“If it breaks out, it’s literally, ‘Katie bar the door,’ and there will be mass migration into the United States,” Kelly said in remarks to the National Defense University on Tuesday. “They will run away from Ebola, or if they suspect they are infected, they will try to get to the United States for treatment.

This is a real possibility ignored by the CDC and the Obama administration.

Will we invoke our normalcy bias to ignore or mock these types of real possibilities?

Bloomberg posted an article that mocked Ebola’s “worst case scenario” and sugar-coated the outcome in the United States.  I posted the following comment.

Wow! I'd get really FAT from that sugar-coating. Given the facts, the spread, and human nature to date, here is what to expect by January:

* Spread to several additional countries in Africa
* Close to 100,000 total cases and over 50,000 total deaths and accelerating
* Cases in several countries in Europe and the Middle East
* Outbreak in Mexico, Central and South America
* Increased influx, aka "torrent" of scared and potentially infected refugees crossing our border from Mexico
* Over 100 cases in the US and growing

Within a few months we will see reductions in travel, forced and voluntary, people avoiding events and activities involving large groups of people, some sectors of the economy heavily impacted: air travel, theaters, sports venues. School attendance will decline.

Until our population sees credible signs of rhetoric matching reality, fears and concerns will outpace what we are being told, whether what we are told is true or not. Circular reasoning, yes. But that is the way it works.

While most comments basically agreed with my assessment, one did not and questioned why I would comment if I was not an epidemiologist.

Here is my reply:

My basis for these opinions are as follows:

Just processing recent trends and behaviors, and using common sense and logic - such as is currently absent from the CDC, some hospitals, our president, and others that look to 'big daddy' for direction rather than using their head as if we are mindless minions. It appears that common sense may be more valuable than an epidemiology degree at the moment. Given the errors to date and the unbridled arrogance of our government and many professionals, we have a poor start in the fight and not likely to learn much going forward.

And your basis for criticism is what?

Both the normalcy bias and deferring our use of common sense to those who should know better but don’t is the root of our Ebola angst in the US.

Hospitals and the CDC 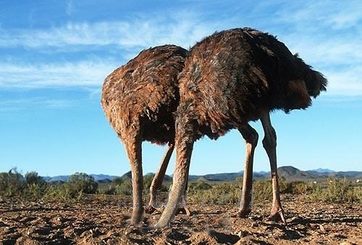 These are just a few examples of how “big government” has discouraged us from thinking for ourselves and using common sense.

Related:  “If You Want to Live, Ignore the CDC”  Article by a renowned doctor.

Posted by Gerardo Moochie at 3:11 PM