Four strikes around Guam: How would we react?

A fascinating chess match is underway.  North Korea says it is planning to fire four missiles to land around the perimeter of Guam, a major US military base in the western Pacific.

The mega players are:

Within the North Korea/China sphere we have…

Kim Jong-in, known variously as the crazy fat boy and China’s pit bull and his bevy of military generals and rocket scientists..

Given the following facts, how would you expect China to react relative to North Korea:

“China is North Korea’s most important ally, biggest trading partner, and main source of food and energy. It has helped sustain Kim Jong-un’s regime, and has historically opposed harsh international sanctions on North Korea in the hope of avoiding regime collapse and a refugee influx across their 870-mile border.”

And we have the US/Japan/South Korea…

US media using scare tactics reminding us that we have not been closer to nuclear war since the Cuban Missile Crisis.

Japan and South Korea who are likely suffering a severe case of Stockholm Syndrome in fear for their fate from the bullying military displays from North Korea’s “crazy man.”  The crazier he acts, the more effective his bluster and aggressive foreign policy is likely to be.

So back to China’s relationship with North Korea:

China and North Korea have a lot in common:  Most important allies, biggest trading partner, opposed to sanctions, 870-mile common border.  They are both in their own side of the world.   And the big unmentioned:  China would love to see a reunification of North and South Korea under the domination of the North.  China has much more in common with the North than the South.

BEIJING (Reuters) - If North Korea launches an attack that threatens the United States then China should stay neutral, but if the United States attacks first and tries to overthrow North Korea's government China will stop them, a Chinese state-run newspaper said on Friday.

Is there any question as to whose side China is on visa vie attempts of the US to impose effective as opposed to token sanctions?

The first question is:  Will China be effective in preventing North Korea from its planned firing of rockets that encircle Guam?

The second question is:  Will China be effective in preventing North Korea from continuing with its development of nuclear weapons and the systems needed to deliver them across the Pacific? 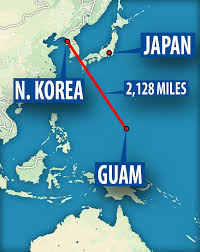 thought as explained later, below.  Initial reaction:  “Yes” because it does not appear to be in China’s interest for North Korea to provoke the US with a display of rockets in this manner.

My answer to the second question is “no.”  China has no interest in limiting North Korea’s nuclear capabilities.  Why should they?  China has nukes – over 260 warheads.  I would not be surprised if China assisted North Korea with that technology every bit as much as  any rogue nations such as Iran has done.

This next question is based on the assumption that China will NOT reign in their favorite ally – that North Korea will continue to fire off their display of rocketry:

What will the US do when North Korea sets off 4 missiles to land around the periphery of Guam?

Here are a few alternative scenarios should this occur…

Given the nature of Trump to bluster, ridicule, and threaten as part of his “Art of the Deal” negotiation tactics, given the nature of Congress, both Democrats and Republicans, to oppose most things Trump proposes, and given the distaste for and likely opposition to any military action that might upset American’s comfort zone, I place a bet on #6.:  Bluster and no substantive action.  Our action relative to North Korea will be very similar to the “horrible” agreement we made with Iran concerning its nuclear program.  There was a lot of bluster about how terrible it was and that one of the first things we would do after being elected is to tear it up.

Has that happened?  Will it happen?  No and no.

Our nation is on the downhill side of the apex of not offending anyone – socially, politically, militarily.  We didn’t do much with Iran’s program.  We will do even less concerning North Korea. We have indeed become a nation of snowflakes.  Any sanction we impose on North Korea will be token.  Any embargo we place on Chinese goods will be token.  Any military action we pursue will be minimal and token.  And finally, what significant action did we take when China built and militarized islands in the midst of international sea lanes?  It didn’t happen over night.  They were years in progress.  We have essentially done nothing.

Knowing that the above is the likely reality, China will have no interest in reigning in North Korea with regard to either their missile launches or their nuclear program.  They know the US has no effective leadership and no heart for engaging in a manner that would likely upset our addict-like comfort zone.

Those who rationalize “why shouldn’t North Korea have their nukes?  So what if they use them as a threat for South Korea to capitulate to them?” will prevail.

The US will go on, happy, but no wiser.  One more war fought in vain.

But will we do it?  I seriously doubt we will.  Note the comments section that follows the article.

Posted by Gerardo Moochie at 9:32 PM