Freedom of religion, freedom of worship and Islam

Ted Cruz’s dad, Raphael, reminded us recently about the difference between “freedom of religion” as our Constitution sets forth, and “freedom of worship” as Obama and communist countries set forth.

The difference is freedom of religion allows us to practice our faith outside of church – prayer in schools, symbols in parks and in the public square, prayers before events, evoking the name of diety in public discourse.

Freedom of worship confines the practice of our faith to inside the walls of the church.  Read more of what Raphael has to say about this HERE.

How far should the practice of someones faith be allowed to go?  How about Islam and Islamic sharia?  How about  lashings for not walking behind your husband, cutting off of fingers, hands or feet for stealing, and cutitng off heads for insulting Muhammad, being homosexual, or leaving Islam?  These “relgious practices” might be considered by some to fall under the definition of “freedom of religion.”

How about a religion whose central doctrines require submission to a religious diety and its human hierarchy and enforcers?  And not just for believers in that “religion” but those of other faiths as well.  How far, really, should freedom of religion go?

Well, it can truthfully be said that it depends on the definition of “religion.”  Is “relgion” what we understand from Christianity, Judaism, Hinduism, Sikism, and Buddhism?  The doctrine and practice of these religions are relatively passive, benign, peace-loving, and personal.

Or does “religion” also include Islam which is not passive, peace-loving, or benign, in spite of what its propagandists lie about.  Islam is aggressive, supremacist, intolerant, and violent in its core doctrines and throughout most of its history.  Islam has become prominent more for its coercive and violent political practices than any sense of “religion” envisioned by the drafters of our Constitution. 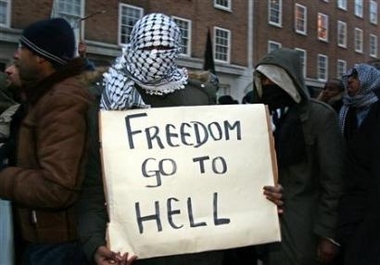 Based on the understanding of “religion” by our founders, these characteristics should disqualify Islam from the religious protections of our Constitution.

We have lost our history.  We have ignored the values that made us a great nation.  Many believe that because of this loss of historical and religious perspective that we are now a nation in decline.

Too many of us believe that all religions are alike – even Islam – and they all deserve the protections of our Constitution.  Are they ?  Do they?  Hell no!

Islam was no more in the mind of our founders in the “religious” context than was Communisim or Fascism.

Raphael Cruz has it right about the superiority of “freedom of religion” over “freedom of worship.”  But I’ve heard him speak.  Neither he nor his son Ted have a clue about Islam and the fact that Islam is an anti-religious political system that is a threat to this nation.

Justice Scalia was the Supreme Court’s stalwart for understanding and promoting the basis for interpreting the Constitution based squarely on the religious heritage of our country.  The Republicans in Congress better damn well prevail in seeing to it that appointment of Scalia’s replacement is NOT made by Obama.  This country does not need another socialist Supreme Court justice who does not give a flip about the reasons for and value of this nation’s founding principles.

Donald Trump was the most pointed of all the candidates when asked who he wants to replace Scalia (from Newsmax):

“Trump, appearing on NBC, was more direct when asked what he would want in a nominee: "Someone just like Justice Scalia."”

Posted by Gerardo Moochie at 12:09 PM