Suicidally misleading claims about Islam from the Pope…

If misleading the flock is a sin, then the Pope needs to pray for an extra dose of mercy.  Once again the Papacy is proving itself worthy of being an anti-Christ, if not THE anti-Christ.

Am I being too harsh?  Absolutely not based on this latest outrageous Papal decree.

The Pope’s latest instruction to the Bishops, Clergy, and lay faithful of the Catholic Church is an exhortation that “authentic Islam and the proper reading of the Koran are opposed to every form of violence.”

Nothing. Could. Be. Further. From. The. Truth!

This statement is diametrically and diabolically opposite the truth.  Authentic Islam promotes coercion and violence as their means of “evangelism.”  Mainstream orthodox Islam has maintained this doctrine since the days of Muhammad.  Virtually all of today’s influential Imams promote the coercion and terror that has been an integral historic teaching of the Qur’an and Muhammad .

The office of the Pope is either infiltrated by Islamic agents or influenced by naïve and ignorant advisors.

Does the Pope truly believe that “authentic Islam and the proper reading of the Koran are opposed to every form of violence?  Or is he attempting to stem the increasingly obvious truth about Islam among a growing number of Catholics to promote more effective evangelism?.  Or possibly, like most Stockholm Syndrome infected liberals is he denying the facts about Islam out of fear? 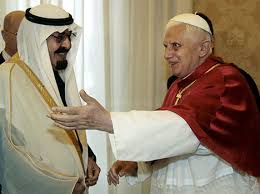 Are lies about Islam required to engage Catholics in effective evangelism?  Doesn’t it make better sense to have as much understanding as possible about the beliefs of those we attempt to evangelize?  Feeding the flock lies and withholding the true nature of a Satanic ideology – in this case, Islam –  is hardly a formula for evangelizing success.  If the truth shall set us free, lies and misrepresentation will sentence us to bondage. 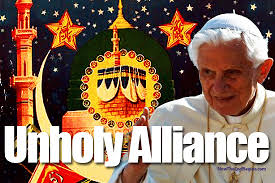 If the office of the Pope is neither infiltrated by Islamic agents nor ill-advised by ignorant and naïve underlings, then is the Papacy in fact influenced by Satanic forces of a nature that could be described as The Anti-Christ? 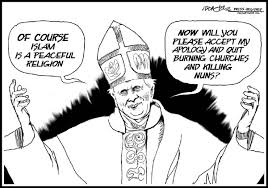 Here is more on the Pope’s decree from Atlas Shrugs.

The following is the relevant excerpt of “Apostolic Exhortation Evangelii Gaudium”:

APOSTOLIC EXHORTATION EVANGELII GAUDIUM OF THE HOLY FATHER FRANCIS TO THE BISHOPS, CLERGY, CONSECRATED PERSONS AND THE LAY FAITHFUL ON THE PROCLAMATION OF THE GOSPEL IN TODAY’S WORLD Vatican.va November 24, 2013:

253. In order to sustain dialogue with Islam, suitable training is essential for all involved, not only so that they can be solidly and joyfully grounded in their own identity, but so that they can also acknowledge the values of others, appreciate the concerns underlying their demands and shed light on shared beliefs. We Christians should embrace with affection and respect Muslim immigrants to our countries in the same way that we hope and ask to be received and respected in countries of Islamic tradition. I ask and I humbly entreat those countries to grant Christians freedom to worship and to practice their faith, in light of the freedom which followers of Islam enjoy in Western countries! Faced with disconcerting episodes of violent fundamentalism, our respect for true followers of Islam should lead us to avoid hateful generalisations, for authentic Islam and the proper reading of the Koran are opposed to every form of violence.

Note:  The photos contained in this blog (except the last one) depict the friendly engagement of the Papacy with Islamic representatives.  These Papal actions send absolutely the wrong message to trusting Catholics.  The last photo depicts the results of the Papacy misleading Christians about Islam.

Posted by Gerardo Moochie at 3:36 PM

If the Pope is correct then he should be willing to go to, say, Saudi Arabia and start passing out Bibles to residents of that moderate Islamic state. And maybe hold a mass for those willing to brave the threats of the followers of Islam.