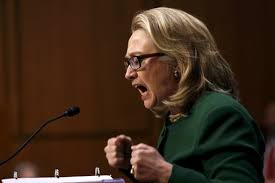 So, that’s what the choices boil down to, Hill?  Islamists “out for a walk” or “decided they’d go kill some Americans…”  How long will it be before ignorant sons of bitches like you acknowledge the truth about Islam and the ignorant rabble that follow that fascist ideology to a “T.”  How many American deaths will it take before your Muslim-pandering cronies (both Republican and Democrat) admit the truth about the motives of your good Islamist buddies?

What difference does it make?  Well, this for starters.  Despite your WORTHLESS declaration that “…it is our job to figure out what happened and do everything we can to prevent it from ever happening again, Senator…” you will NEVER figure it out as long as you insist on denying and covering up the truth.  You, Hillary, along with your peach of a husband, have glaring character flaws.  Lying is one of them.  Two freakin’ peas in a pod.

The truth DOES make a difference – which up to now, is missing from your lying, deceitful lips.  What difference does it make?  Without the truth, the problem will escape notice.   In addition to YOU being part of the problem, the problem is identifying our friends and distinguishing them from our enemies.   Your insistence on denying who the enemy is will only invite further murders at the hands of an arch enemy that you and other Pollyanish fools continue to declare is not Islam.  Is the oil money so important to you that you are willing to sacrifice American lives and the nation itself?

The disrespect I have for you, Hill, rivals that which I maintain toward any other mass murderer.

Lord, may the whole truth come out at these hearings and the proper justice be served.

Posted by Gerardo Moochie at 3:31 PM