They won’t do the work Americans will do

It has finally happened.  Foreigners refusing to do the work Americans will do.  In this case it is a group of college-aged students from Turkey who were promised wonderful things by our State Department – instead finding themselves actually working – working, I say - in a Hershey candy factory in Pennsylvania. 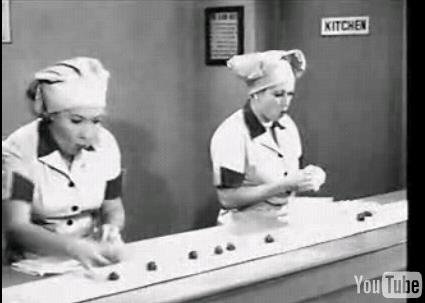 Lucy and Ethyl at the candy factory doing  jobs Americans do, although their technique leaves a little to be desired.

For years, it has been touted as a form of vacation diplomacy: a U.S. government program that selects college students from across the globe to come work at beach resorts, amusement parks and other seasonal jobs. In the process, the visitors are expected to imbibe American culture, practice English and take home fond memories.

But this August, a group of students complained that their work conditions were closer to a sweatshop than a summer break, sparking demands for government intervention and a firestorm of bad publicity that federal officials are now trying to tamp down.

More than 300 young foreigners, packing candy in a warehouse in Pennsylvania, staged a high-profile walkout and protest against their employers and the State Department, which oversees the program. They alleged that they had been worked to exhaustion and had met few Americans except supervisors who pressed them to pack faster and threatened to have them deported.

“My parents agreed to send me because it would be a way to improve my English,” wrote Aysel Kiyaker, a student from Turkey who paid $3000 for her airfare and work visa. “They told us the job would be easy and fun and they would have pizza parties for us.”

Instead, Kiyaker found herself lifting heavy boxes on long shifts in the rural factory, owned by the Hershey Company. “After work my whole body was numb,” she wrote in an affidavit for the National Guestworker Alliance. She said one friend was threatened after she complained, and another was fired for not working fast enough. “After that happened, people were more afraid.”

The non-profit guest-worker group took up the students’ cause and filed a formal complaint against the State Department, as well as Hershey and the Council for Educational Travel USA (CETUSA), charging that they had exploited the students as cheap labor. The strike ignited a media frenzy and raised alarms in Congress, in part because of concerns that American workers were being displaced.

CETUSA, which manages the program for the State Department, denied the allegations. Company officials suggested the striking students had been misled by union activists, and said they had placed other students at Hershey for seven summers without any problems. Hershey officials said they owned the building but had no role in hiring or supervising the students, which were handled through sub-contractors.

“If any of them were dissatisfied, we were not hearing it,” said Terry Watson, CETUSA’s president. “We sponsor thousands of students every summer. The great majority of them have a wonderful experience and go home spreading the good word of America.”

But the bad publicity stunned and embarrassed the State Department. Officials there promised to investigate the alleged abuses and review the program, which brings more than 100,000 foreign students to the U.S. every summer. This week, department officials said they are planning a major overhaul to prevent such problems from recurring and reinforce the program’s diplomatic purpose.

“We want to make sure it meets our goals for worthwhile exchanges that promote better relations with other countries,” said Michael Hammer, an acting assistant secretary of state, adding that the summer jobs are supposed to be part of a “positive cultural experience.”

In July, before the Hershey case erupted, the department tightened program rules after reporting an increase in “fraudulent job offers, lax job vetting” and other problems. Yet Hammer said that more than 90 per cent of students report being satisfied with their experiences — and that many re-apply for a second summer.

Vlad Bicu, 26, a student from Romania, worked in Colonial Williamsburg for two summers and returned this June to work at an amusement park in Ohio. Each time he has saved his wages to travel around the United States before returning home. “I have seen all America now,” Bicu said this week while visiting New York City. “Your Grand Canyon is the most beautiful thing I have ever seen.”

Yin Fung Tan, 23, a student from Malaysia, spent this summer at Morey’s Piers, an amusement complex on the New Jersey shore, earning an average of $300 a week as a cashier and ride operator. The most important thing she learned was “to look people in the eye and speak to them. In our culture we never do that,” she said.

Company officials at Morey’s Piers said they recruit more than 700 foreign students each summer, travelling to job fairs from Singapore to Dublin. All start at $7.25 per hour and work alongside American students. “They learn from each other, and it changes their lives,” said Denise Beckson, director of human resources.

Labor activists, however, asserted that the alleged abuses were far more typical than officials acknowledge. They said even students in lighter hospitality jobs are often underpaid, poorly housed and threatened with losing their visas or right to return if they complain.

“While the State Department was asleep at the wheel, this entire program has turned into a captive labor source where students are exploited for profit,” said Saket Soni, executive director of the guest-worker group. He said the program left U.S. workers “locked out” of steady jobs and foreign students “locked in.”

The State Department already has rules in place to protect foreign student workers, who must be paid minimum wage and are banned from certain risky or sensitive jobs, such as patient care and adult entertainment. This week, department officials said they are planning to add further safeguards before the next students arrive.

In the Hershey case, however, officials said only that their investigation is “ongoing,” and they have taken no action against CETUSA, Hershey or its sub-contractors. In detailed formal complaints, the guest-worker group described systematic efforts to intimidate students who complained and charged that government investigators had worked in tandem with factory managers.

CETUSA, in turn, has fought back with competing affidavits from former Hershey workers. It quoted Lenka Vavrova, a Polish student, as saying she was “ashamed” of her co-workers for causing a fuss. They all knew what to expect at the candy factory, she wrote. “If they did not like it, they should have chosen something else.”

Posted by Gerardo Moochie at 11:12 AM