The Limits of Religious Accommodation…

OK, here’s the rub:  There are religions wherein some of their doctrines, morals, and traditions are illegal based on our Judeo-Christian legal system.  For example, practitioners of Santeria, a Cuban blend of African lore and Catholicism, occasionally make the news. Why?  Because their practice requires the use of animal sacrifices. Many communities tried to outlaw this practice, but the Supreme Court ruled otherwise.  Undoubtedly, PITA was pissed.  Here is a summary of related legal action from Wikipedia:

n 1993, the issue of animal sacrifice in Santería was taken to the Supreme Court of the United States in the case of Church of Lukumi Babalu Aye v. City of Hialeah. The court ruled that animal cruelty laws targeted specifically at Santería were unconstitutional.[20]

In 2009, legal and religious issues that related to animal sacrifice, animal rights, and freedom of religion were taken to the United States Court of Appeals for the Fifth Circuit in the case of Jose Merced, President Templo Yoruba Omo Orisha Texas, Inc., v. City of Euless. The court ruled that the Merced case of the freedom of exercise of religion was meritorious and prevailing and that Merced was entitled under the Texas Religious Freedom and Restoration Act (TRFRA) to an injunction preventing the city of Euless, Texas, from enforcing its ordinances restricting his religious practices relating to the use of animals,[21] (see Tex. Civ. Prac. & Rem. Code § 110.005(a)(2)) without the court having to reach his claims under the First and Fourteenth Amendments. The city of Euless, even after losing a drawn-out lawsuit that tested the boundaries of religious liberty in Texas, was still searching for new ways to shut down Merced's spiritual practices.[22]

Now comes a tougher religious nut, Islam’s “sharia.”  Should or will the 1,400 year doctrine and traditions of Islam be upheld by our courts on the basis of freedom of religion and “religious accommodation?”  Keep in mind that most of Islam’s religious mandates are antithetical to our own long standing legal traditions, such as:

Which of these “religious mandates” will our supreme court uphold in the name of “religious freedom” or “religious accommodation?”

It is likely that our rapidly growing and influential Muslim population will demand religious accommodation for a number of their “religious” practices. 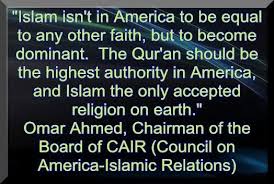 And if this creates political havoc, the next step will be progressives proposing the elimination of all manner of religious accommodation out of a sense of “fairness.”  Example:  Ok kids, since this piece of poison candy isn’t good for you, you aren’t allowed to have any candy.  Or one plane crash  used as an excuse to prohibit all flights.

If reason were exercised by our electorate, our leaders, and our courts they would determine that any doctrine, tradition, and law of Islam that contradicts our established legal system and cultural mores shall be unlawful, and promotion of such laws considered as treason or sedition.  But I doubt that will happen.

If reason is applied, Muslims are certain to cry “discrimination against Islam.”  What about  the religious traditions of Santeria that break our animal cruelty laws?

The above conundrum is exactly why Islam needs to be treated NOT as a “religion” in these matters, but as a political ideology, in the same manner as Nazism and Communism.  Islam is an all-encompassing way of life with an overarching legal/political component:  Sharia.  It is so far deviant from our Judeo-Christian tradition and ethics that it is incompatible with and destructive of the legal traditions of our nation and our way of life.

The cultural traditions and doctrines of Islam are the primary motivators (excuses?) for terror and killing in the world in our age.  That should be reason enough to distinguish Islam from virtually every other belief system we must contend with.  Islam is not worthy of “religious accommodation.”

That should also be reason enough to stop the influx of Muslims into this country and to make it clear to Muslims who choose to remain here that they will be subject to the laws of this nation, and not their Sharia.

Obama accommodates Islam by caving into Iranian demands for continuing development of nuclear weapons DESPITE Iran’s leader proclaiming “DEATH TO AMERICA.”  Do you see anything wrong with that picture?

Posted by Gerardo Moochie at 4:07 PM